I love making homemade marshmallows. For one thing, they’re fabulous. If you’ve only ever tried the store-bought kind, make these just once so you can taste the difference. Like night and day. For another thing, they’re a great example of kitchen alchemy, and since I’m a tiny bit of a closet science nerd, I love me some kitchen alchemy.

It’s hard to believe that this awful-looking, brownish, liquid mass is going to turn into glorious, fluffy, white marshmallows.

You refuse to believe it, even as you watch the beater spin, and then all of a sudden–BOOM! You’ve got marshmallow fluff! And after a couple of hours of setting, you’ve got the best damn accompaniment to hot chocolate, chocolate fondue, or s’mores you’ve ever tried. So, so worth it.

So, it’s nearly Halloween, and one of my friends sent a picture of a fabulous little cake adorned with piped marshmallow ghosts. She suggested I try these out for our little office Halloween party and, of course, I rose to the challenge. And quite a challenge it was: I didn’t beat the marshmallow quite long enough, so the first couple of ghosties collapsed into Hershey kiss-shaped puddles. The middle batch were great, but by the time I piped the last few, the marshmallow had set too much and they came out less like fluffy ghosts and more like, well, dog poo, if we’re being honest. Those I just cut up into little discs for tossing in cocoa, but the others got some faces painted on and are ready for their close-up at the office tomorrow.

Process
Dissolve the gelatine in 1/3 cup water in the bowl of a stand mixer. Let sit for at least 5 minutes.

Meanwhile, combine the sugar and remaining water in a saucepan. Bring to a boil and boil until the sugar dissolves and the mixture reaches a temperature of 240 degrees F on a candy thermometer.

Fit the mixer with a whisk and start it up to get the gelatine moving. While the mixer is going, carefully pour the hot sugar syrup into the bowl. Raise the mixer speed to high and let it go for 8-10 minutes, until the mixture turns white and fluffy and holds soft peaks.

Spoon the mixture into a pastry bag fitted with a large, round tip. Working quickly, pipe out little ghosts (don’t get too ambitious–if they’re too tall, they’ll topple right over). I found that piping a good, fat, solid base before gradually moving upwards helped.

Let the ghosties dry for at least 2 hours, or overnight. Once set, paint little faces on using the food colouring and a small paintbrush used only for food. 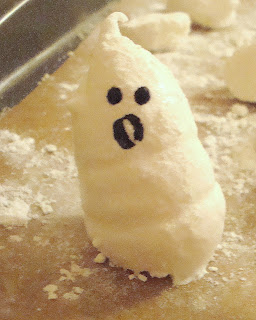 *Warning: This is not for the faint of heart or the compulsively neat. Marshmallows are messy, and you do run the risk of being burned with hot sugar if you’re not careful. The first bit can be tackled with plenty of hot water, the second with plenty of cold.